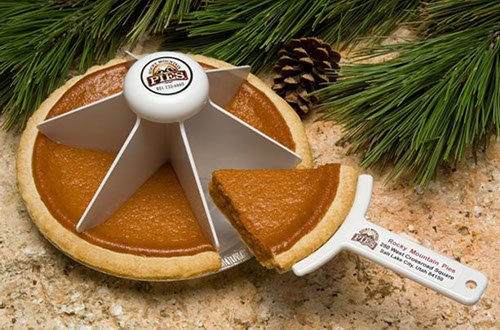 THE NUPRO COMPANY home of the

Marie Callender and her son Don Callender are the uncontested pioneers of the retail pie/restaurant business. The Southern California based restaurants were unique in their formative days, providing home made, home baked, old fashion environment for customers. Not only was the food delicious but the main feature was PIE, and PIE in quantities we made. Produced on the premises each day were 50 varieties of fruit, cream & specialty pies. Grandma was even running to keep up with this fast moving and innovative approach to producing and marketing PIE. Not only could you order dessert from a lengthy pie list but you could take one home. This was new and the public loved it. Grandma even took a little break and rather than bake her own she could slip into a Marie Callender Pie store, buy a beautiful apple or cherry pie, go home take a nap, and nobody knew the difference. It was a fun business where much was learned about what the public liked about PIE.

Sam Park is the owner of The NuPro Company (piecutters.com) and is a graduate of the Marie Callender Pie concept. He owned and operated 12 franchise restaurants throughout the West including two in California. He was the third franchisee to come aboard in the beginning stages of this unique family dining concept and from there he expanded to Utah, Idaho, Washington & New Mexico. For Sam it all began in 1968 in Arcadia, California and from there to Toluca Lake, California. During this time his son Sam Jr. learned as much as he could about the pie business and is now in charge and running the “Stay Fresh Pie Cutter” company which began during those early years.

Both Sam’s became well acquainted with PIES and familiar with the word “perishable.” They were taught by the boss “customers” that pie to be excellent MUST be fresh. If they are not handled properly they have a very short shelf life. All restaurant operators are anxious about trying to keep CUT PIES fresh, but the edges, being exposed after cutting, always wanted to “dry out a little.” We had stainless steel pie cutters in those days but they were easily damaged in dishwashers and the fins would bend, making irregular slices. Hence the “Stay Fresh Pie Cutter.” Yes! you leave it in the pie, after its cut, protecting and ensuring that every piece is fresh, and it’s practically indestructible.

The NuPro Company has been manufacturing this handy tool for twenty five (25) years and enjoys a customer base which extends across the United States and Canada. This wonderful patented “Culinary Tool,” which has been used so successfully in restaurants has now found a new niche…..Grandma’s kitchen, or even yours. They are wonderful gifts and come boxed as the picture shows.

Outside of the US will have to be actual costs. We will email you the amount.

All sizes of the “Stay Fresh Pie Cutter,” and the handy companion server, come packaged in a beautiful four color gift box. A perfect gift for all occasions.

ALL SIZES ARE ONLY 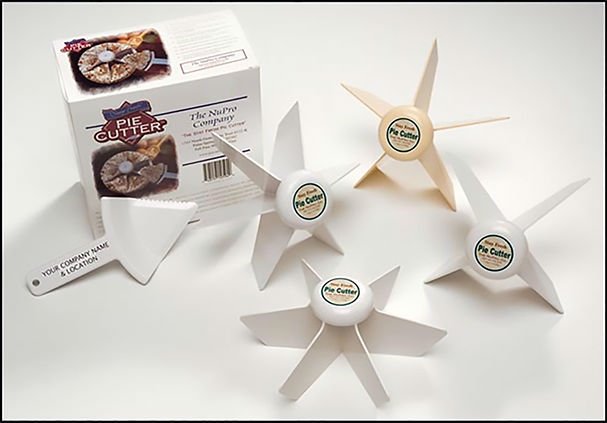 With plenty of appealing features, our Pie spatula is the smart kitchen tool to own. The spatula is the ultimate IN removing a piece of pie from the tin. You can divide the pies into perfectly-even portions by using our Spatula. It fits the “Stay Fresh Pie Cutteer” perfectly and allows you to save each piece of pie without losing one. Saves a lot of money. It has a serrated edge for cutting through the crust of the pie easily. It is specifically designed to cut, remove, and transport pie slices.

The pie cutter & marker scores your pie so you can cut this into perfectly even slices. Make sure everyone gets an equal slice with our pie cutter. We offer the three sizes that are most commonly requested by restaurants and, we assume, by most households, too. 4 cut, 5 cut, & 6 cut. All of these sizes work with a meringue. We also have a squat 6 cut that is not as tall as the others. Sometimes these work on a bun pan in a reach in cooler.

The pie marker scores your pie so you can cut this into perfectly even slices. Make sure everyone gets an equal slice with our pie marker. We offer the three sizes that are most commonly requested by restaurants and, we assume, by most households, too. 4 cut, 5 cut, & 6 cut. All of these sizes work with a meringue. We also have a squat 6 cut that is not as tall as the others. Sometimes these work on a bun pan in a reach in cooler.

Whether for business or for your own personal satisfaction, making use of a pie cutter positively enables you to present your pie in a professional manner. It can add another dimension to your pie cutting. Our Pie Slicer is unique and durable that comes packaged in a beautiful four colour gift box. It’s a handy, clever little gadget to make your time in the pie cutting easier.